skip to main | skip to sidebar

Traveling Away from the Ranch

We're off to Greece for three weeks!  Not the usual goings on at the ranch but a trip of a lifetime.  We'll visit Athens and Delphi and hopefully the Acropolis then off to Crete for a week then onto a cruise of the Greek Islands and a short stop in Turkey, even!  Wow!  We are blessed to be able to take the time, to have our kids to stay at the ranch and look after things and to be traveling with friends we love to travel with.
We'll finish irrigating before the end of the month and pull the pumps and begin readying things for winter.  Already the mornings are cooler and the vine maple (in the mountain passes) has turned red.  No freeze yet though so my roses continue to bloom.  this is a favorite time of year on the ranch.  We'll be missing a bit of it by being in another country but we always come back energized by the richness of this world and its people.
I hope your autumn is memorable.
Posted by Jane at 9:41 AM 3 comments: 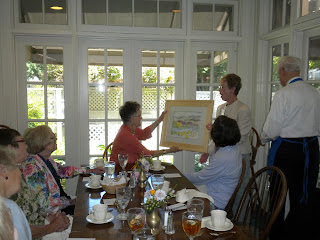 This is the painting that Loeta McElwee painted for me and Jerry. She called it "In Honor of Jane and Jerry and the John Day River" She gave it to us as a ten year celebration for my helping with fund-raising for Albertina Kerr, an organization that serves children and adults with disabilities in Portland, Oregon. Great work of art!
Posted by Jane at 2:25 PM 3 comments: 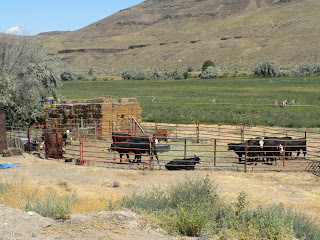 Yes, Jerry's brought them back into our lives.  But that's all right.  They'll eat the hay we didn't sell last year and keep the weeds down.  We also found a new home for Stan the goat.  He'll be happier with the neighbor's sheep and horses.  It's the same neighbor who took Henry our pony mule in the day after we got Stan as a pal for him.  Unknown to us, Henry didn't like goats so he traveled seven miles, crossed the river and made his way up the ravines to his new home.  Sometimes the best of plans just don't work out and Henry took things into his own hands and found the neighbor with horses.  This time, the neighbor delivered our cows and they took Stan home with them. I called today and he's happy. A fine outcome indeed. But I miss the old goat.  Who would have thought?  Sometimes getting what we wish for is a surprise.
Posted by Jane at 9:23 PM 1 comment:

Being away has its charms.  We're away from the hassles of the pump getting flooded and having to drive it two hours for repairs that weren't to be finished before we headed East.  We're away from taking walks that require vigilance looking out for rattlesnakes.  I keep Caesar on a leash when we walk now instead of letting him run so that he doesn't just jump on top of a snake waaaaay ahead of me.  Bo stays a little closer to when I have Caesar on a leash. (the rhythm of that -- Caesar on a leash -- reminds me of the Minnesota State Fair's motto of everything on a stick:  chocolate on a stick, deep fried butter on a stick...ok, maybe it's just me).  We're also away from the routines:  writing, exercising, paying bills, handling maintenance issues of relationships and living.  Being away introduces us to new people, events, listening to others talk about their lives, seeing family, being reminded of my parents and sister no longer on this earth.  And feeling good about cousins telling me I remind them of my mother.  There might have been a time when I resented that but no more.  I loved my mom and all her roles even if she drove me crazy when I was growing up. Away means new routines with Jerry, my brother and his family (walking through cornfields instead of through sagebrush trails) and meeting a cousin I didn't know I had.
Being away is also sad at times.  I miss the dogs.  I miss knowing where my stuff is (and not having it in a suitcase).  I miss the time I get up early and write even when I'm struggling with a scene or chapter. I miss the smell of pine and juniper and looking out at the deck with flowers I've planted to see if I can keep them alive.
Today we'll be away from my brothers farm meeting my nephews half way between Red Wing and Mankato where Clayton attends school and is working.  The other nephew (who came to my event in St . Paul, bless him) will meet us too.  That'll be good.
Being away for today means we will return.  And tomorrow, we'll return to Oregon refreshed I think for having been exposed to the gifts of being away and having time to appreciate what we leave behind in both places when we go away.
Posted by Jane at 10:21 AM 3 comments:

Labels: literature family being away 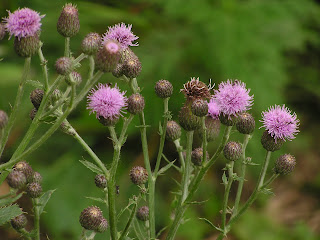 Not since 1948 have we seen river flows at this level.  20,000 CFS (cubic feet per second) on Sunday.  It's starting to go down now so we can begin to see the islands that have been underwater.  Fortunately it only seeped against the dikes and wasn't pushing into the fields.  I'm always amazed at the power of water.  I don't even like to take the dogs for a walk when the river is that high for fear they'll decide to jump in after a floating stick and the current will be too strong for them.  So I watch from a distance and am grateful that the flow is slowing.  A very wet spring for us.  But everything is green, green, green!  I don't know what these are but I love the color.  Nice.
Back to work.

In an earlier post about women in history i mentioned that writing about Jane Sherar (A Sweetness to the Soul) helped me come to terms with my own childless-ness.  Someone commented and asked me to talk about that more.  So here I am, better late than never.
First, I didn't know that the book would take me there.  Jane Sherar had no children of her own but she'd adopted a girl and taken in another and eventually took in a niece as well.  In the first draft, I remember not being sure whether to write her character as someone who wanted children but couldn't have them; or was she a woman unique for the period of the 1860s and someone who didn't want children in her life.  She'd had a strained relationship with her own mother and three of her siblings had died within a week of each other and she'd seen the grief that a child dying can bring.  My editor said to me at one point "You haven't really decided about the child less issue and I think you need to."  So I went back and in the rewriting, she became a woman who wanted children and couldn't have them.  And suddenly I knew that was true for me too.
I'd been fearful of being a poor mother; wasn't certain I was self-less enough to give in that way, to put a child's needs above my own which is the absolute requirement for being a good parent i always thought.  When my body presented serious problems and my husband, who had been married before, wanted no more children (he'd had a vasectomy years before) I made the decision to have a hysterectomy at the age of 30.
But it wasn't until I was nearly 50 before I really dealt with that loss and writing the book helped me go there.
What I discovered is that we do not always get what we want in life; and that I could still have children in my life if I chose.  They would just be there in a very different way.  For me, it was working in an early childhood center on the reservation, helping families with their kids, letting them open me up as I walked beside them as parents that helped bring children into my life.  I still have some of those kids in my life.  The families too.  Jane Sherar had a relationship with the children of the same tribe I worked for so we walked together in that way.
Then when the need arose, we took a grandchild in to live with us first when she was seven and then when she was 15.  I discovered that one didn't have to have given birth to a child to fall in love with them, to ache with the smell of their hair after a bath, to hold them in their sorrow.  Jane Sherar adopted a child when she was 13 or so and had to fight her mother over it to do it.  There were custody issues in the care of our grandchild too, all this while I worked on that book.  But Jane's willingness to be happy rather than being right; her willingness to accept what God had given her even though it wasn't all she thought she needed, both those pieces of wisdom entered my blood stream through the writing of that book.  Getting clear about what mattered, identifying what I had control over and what I didn't, that all came through in the writing of that story, too.
To receive letters from couples and from individual women telling me that reading that book brought them to new places of understanding about their own infertility has been one of the greatest gifts a story can give.  I understand that some have been given the book by their doctors and by their therapists. That the story gives peace where there had been none is a great joy to me.
That's how writing about Jane Sherar helped me come to terms with my child-less ness.  I'll be forever grateful.  I hope that helps!  Thanks for asking.
Posted by Jane at 9:17 PM 5 comments:

Labels: literature infertility A Sweetness to the Soul

Today I never even walked outside.  I opened and closed the door fifty times to let the dogs in and out and each time I inhaled the air, looked at the river deck with the flowers I'd planted, admired the newly mowed lawn and how the green took my eyes to the rose bushes and beyond to the river running through the ranch.  It's high from recent rains.  It's looking bluer than brown though.  And I'm reminded that this is still an amazing place to have put down those "luminous fibers" that Barry Lopez speaks of in Arctic Dreams where he says some of us are not finished at the skin and send out fibers to a soil we've allowed to become a part of us.  I don't have to walk outside to feel the dirt beneath my feet to know I'm connected here.  And yet, all things change.  Even the river.  And our relationships to place.  In the months ahead, there may be new changes to our relationship to this land.  But no matter what happens, we will take with us a few of those luminous fibers with us.  For today, I will let the fibers be my eyes taking in the blessing of a place.
Posted by Jane at 8:55 PM 1 comment: